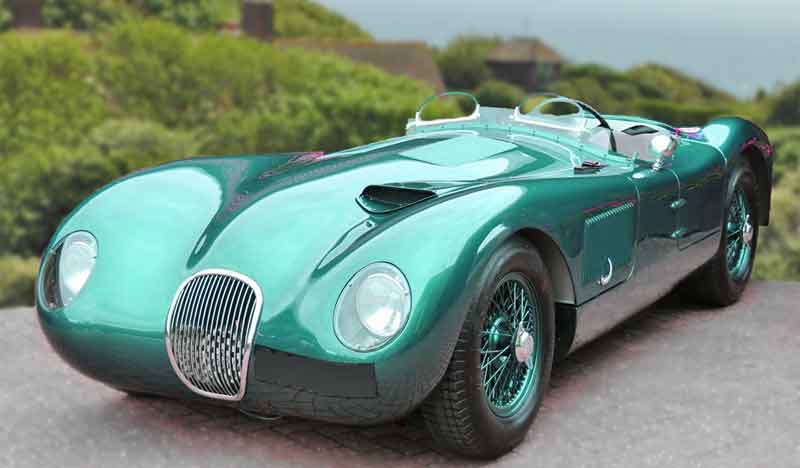 The success of Jaguar Cars after the Second World War can be directly attributed to a superb engine, the XK. Initially introduced in the XK120 sports car, with a capacity of sub-3.5 litre, this straight six double overhead camshaft motor was, apparently, designed during the second world war whilst company boss Sir William Lyons and his chief designer William Heynes were at the factory on fire duty.

Lyons insisted that the basic design of the engine would have to be good for many years to come, and look good as well! It certainly succeeded in both respects and was in production, albeit after numerous improvements and alterations, right up until 1999.

Jaguar had raced the XK120 at Le Mans in 1950 but it had failed to win outright honours. It also wasn't considered strong enough for serious road racing by this time. The decision was made to bring out a new racing car, the XK120C, or C-Type for short. on its debut it was an instant success, coming in first at the 1951 Le Mans 24-hour race, on it's very first attempt.

The new car was based on a multi-tubular frame, for lightness and rigidity, with an aluminium body, so it weighed considerably less than it's predecessor. The engine however was the same basic design, but tuned up a little bit further to produce 210 brake horsepower.

The body style was not only beautiful but very efficient, aerodynamically, too. It was designed by Malcolm Sayer who, having been an aircraft engineer, turned his skills to the task of improving the streamlining of cars. This was his very first racing car design and arguably his finest.

Although this was, on the face of it an out and out racing car; the cabin after all was cramped with little in the way of creature comforts; the same car that was raced was also available as a catalogue model. Most of these were sold in the United States of America where the new owners not only raced them but were able to drive them to and from the racetracks on the public roads as well.

The following year rumours about improvements to Mercedes Benz's competition car prompted some changes to the car's outline, in an effort to give it a touch more speed. This meant alterations to the cooling system; unfortunately these changes reduce the cooling efficiency considerably and although three team cars were entered for the 1952 Le Mans race they all had to retire because of overheating problems. The changes were hurriedly reversed.

The following year, in 1953, the C-Type took top honours at Le Mans again, also taking second and fourth places, and for the first time ever the winning car averaged more than 100 mph.

Altogether 53 C types were made, before production ended in 1953. 43 of these went to private buyers. surviving cars are now amongst the most sought-after and expensive cars in the world. When they do change hands the pricetag is in the millions of pounds.

This website belongs to Barry Harris of Hareclive Rd, Avon, Bristol BS13 0LU and all contents are © Barry Harris 2019.